CONFLICTS WITH US MILITARY

Bombardments by the US Military

Conflicts that involved personal injury or loss of life required an offending clan to compensate the injured clan. Under Tlingit law, the death of a clan member must be compensated with the life of a person of equal rank from within the responsible clan. If the death was caused by a non-Native, the clan would seek a payment of restitution and in some cases would take the life of a non-Native as compensation. Such actions were considered legal under Tlingit law. Under Commander L. A. Beardslee and his successor, Commander Glass, the Americans complied with Tlingit law. However, when Commander E.C. Merriman assumed command in 1882, he retaliated to such acts with great force.

Bombardments of the villages of Kake, Angoon, and Wrangell resulted from such differences in legal systems.

In January of 1869, three men from Kake attempted to leave Sitka against the orders of the American military command. As they endeavored to leave in resistance to the order, one was killed by a sentinel. The others made their way back to Kake, and along the way encountered and killed two white men encamped on Admiralty Island in retaliation for the loss of their clansman. This led to the dispatch of the warship U.S.S. Saginaw to the Kake area, and the bombardment of several villages including Kake. 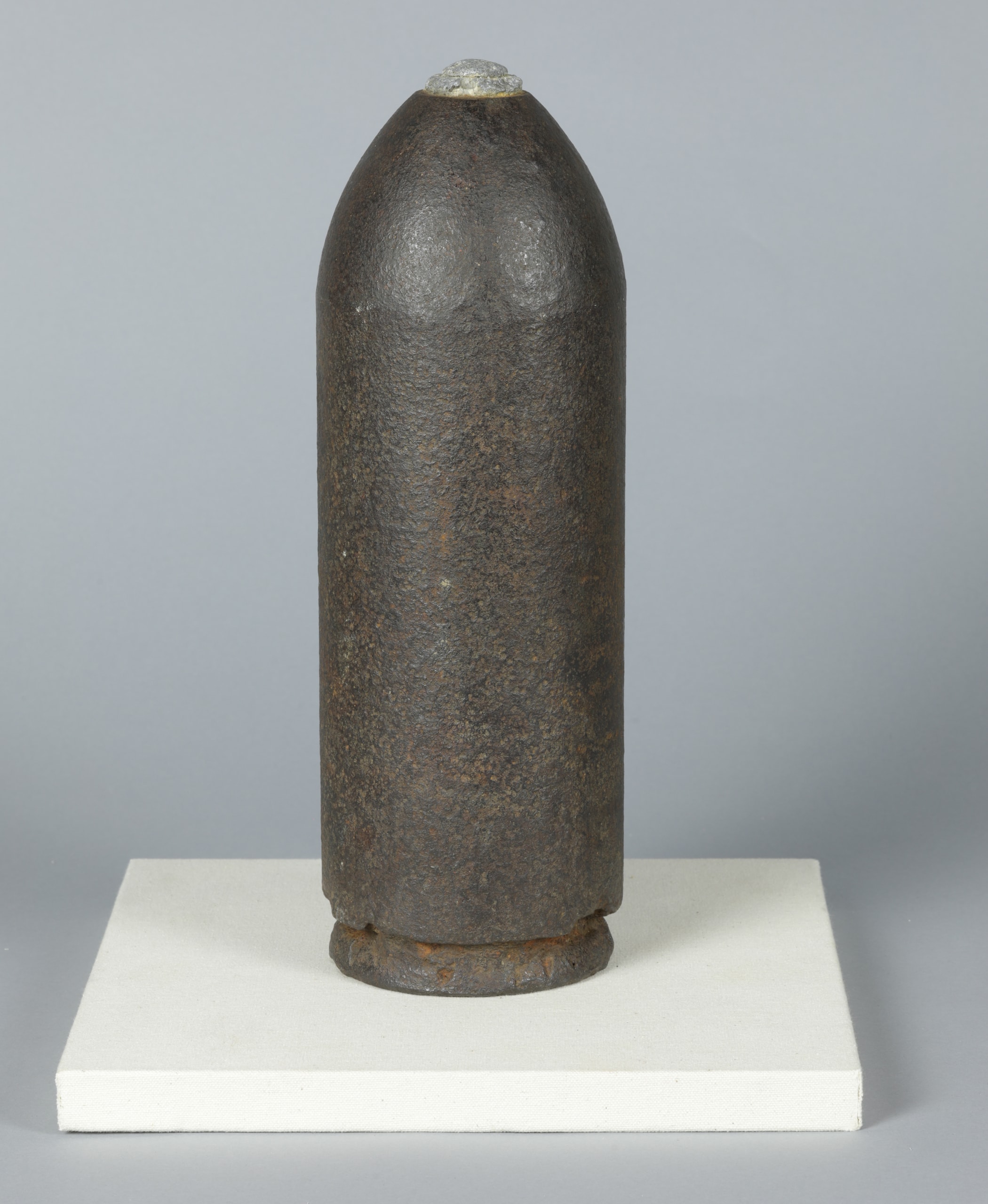 This US Navy shell was discovered in a rotted tree trunk in Kake in the 1940s when the ground was being cleared for the construction of the ANB Hall.

It was kept in a private residence until 2011, when it was turned over to the Organized Village of Kake and deactivated by an Air Force special ordnance team from Elmendorf Air Force Base.

Reports state that three villages (35 clan houses) in Skanáx (Saginaw) and Security Bays and three smaller camps were destroyed, along with the supplies of food stored for the winter and canoes. The main Kake village was also shelled. Though this charge was fired, there is no evidence that it struck anything given its intact and unscathed condition.

This is a standard Parrott percussion fuse used by the US Navy. The type of shell was common during the US Civil War and would have had a wide brass sabot. It was fired from a 30 pound Parrott gun on the US Navy ship USS Saginaw.

It is on loan from Organized Village of Kake to Sealaska Heritage Institute until the can build an appropriate facility for its display in Kake.

Loan of Organized Village of Kake

The Bombardment of Angoon, 1882

After the accidental death of Téel’ Tlein of the Deisheetaan clan, an Angoon shaman of high status, during a whale hunting expedition, the company refused to pay the indemnity of 200 blankets that was demanded by members of his clan. The military claimed that the Tlingit seized a number of hostages, but the facts do not bear this out. White residents at Killisnoo, a whaling station located nearby, appealed to military authorities in Sitka, claiming they were under attack. Two ships manned with more than 140 sailors, marines and officers were dispatched to Angoon. Six children were killed and the village and canoes were destroyed along with its food reserves that had been stockpiled for the winter. Although the Angoon clans were compensated $90,000 in 1973 for the destruction of their village, the clans are still waiting for an apology from the military.

The Bombardment of Wrangell, 1869

The US Army fired bombs from Fort Wrangell into the adjacent village of Kaachxan.áak’w after a Tlingit man named Shx’atoo shot and killed a white trader outside the fort. Shx’atoo was acting according to Tlingit law after learning that soldiers killed his two sons following an altercation at the fort. Shx’atoo fled into the forest, and when village leaders refused to turn him over, the Army responded by firing artillery on the village. Villagers then fired their rifles at soldiers in the fort. After two days of shelling during which houses were damaged or destroyed, Shx’atoo surrendered to avoid further bloodshed. Shx’atoo was tried, convicted, and hanged for murder. During the trial, Shx’atoo responded that he was acting according to Tlingit law and that he would explain this to the trader in the other world; that he did not single him out but would have killed any other white man who had been present. On the next day, he put on his regalia, danced, and sang his song before lunging off the platform with the rope around his neck, instead of falling passively to his death. 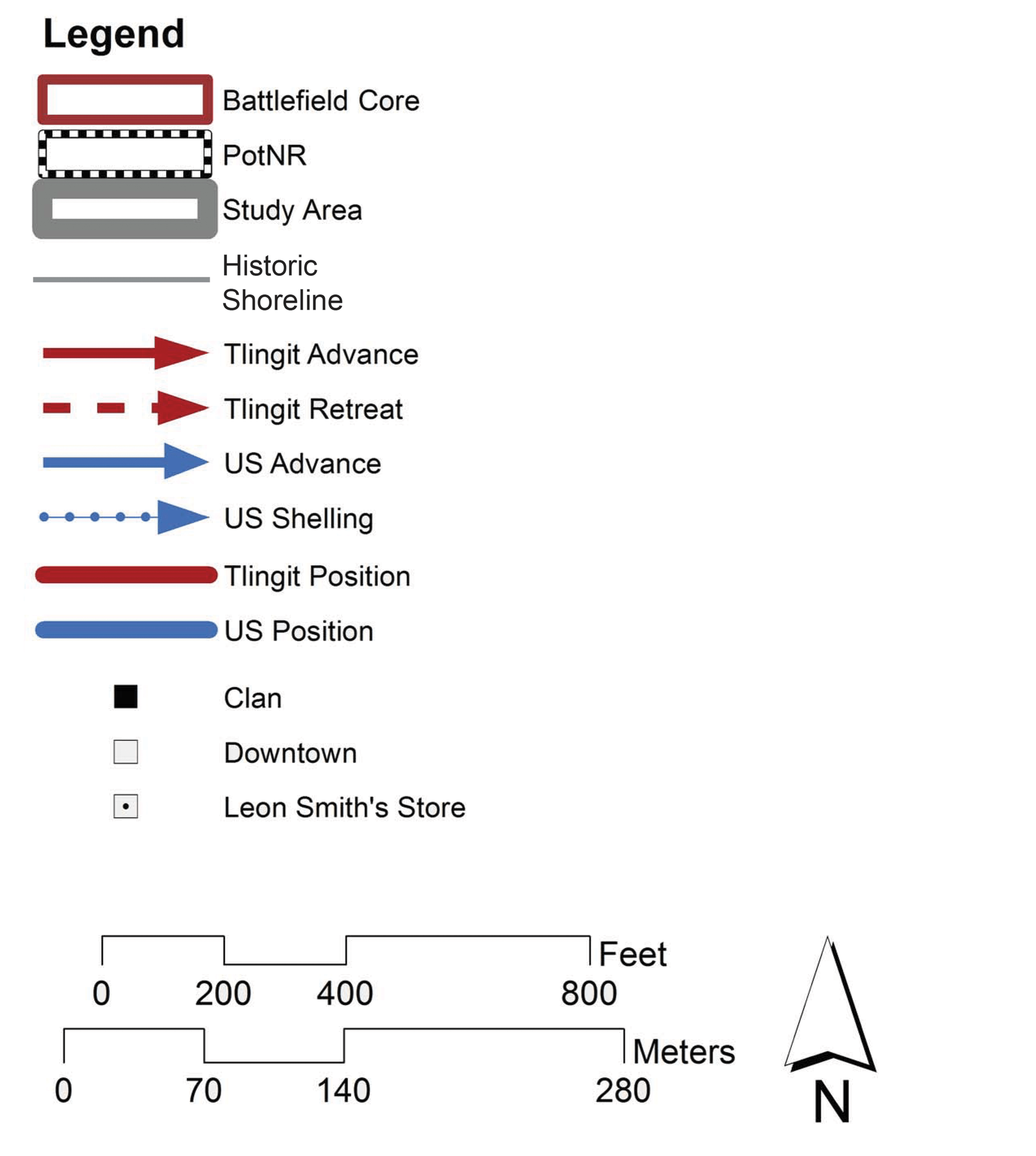 From a report entitled, Ch’a tlákw daak wusitán, It was continuous rain: A Report on the 1869 Bombardment of Wrangell, by Zachary R. Jones. Prepared under a grant to SHI from the National Park Service, American Battlefield Protection Program. 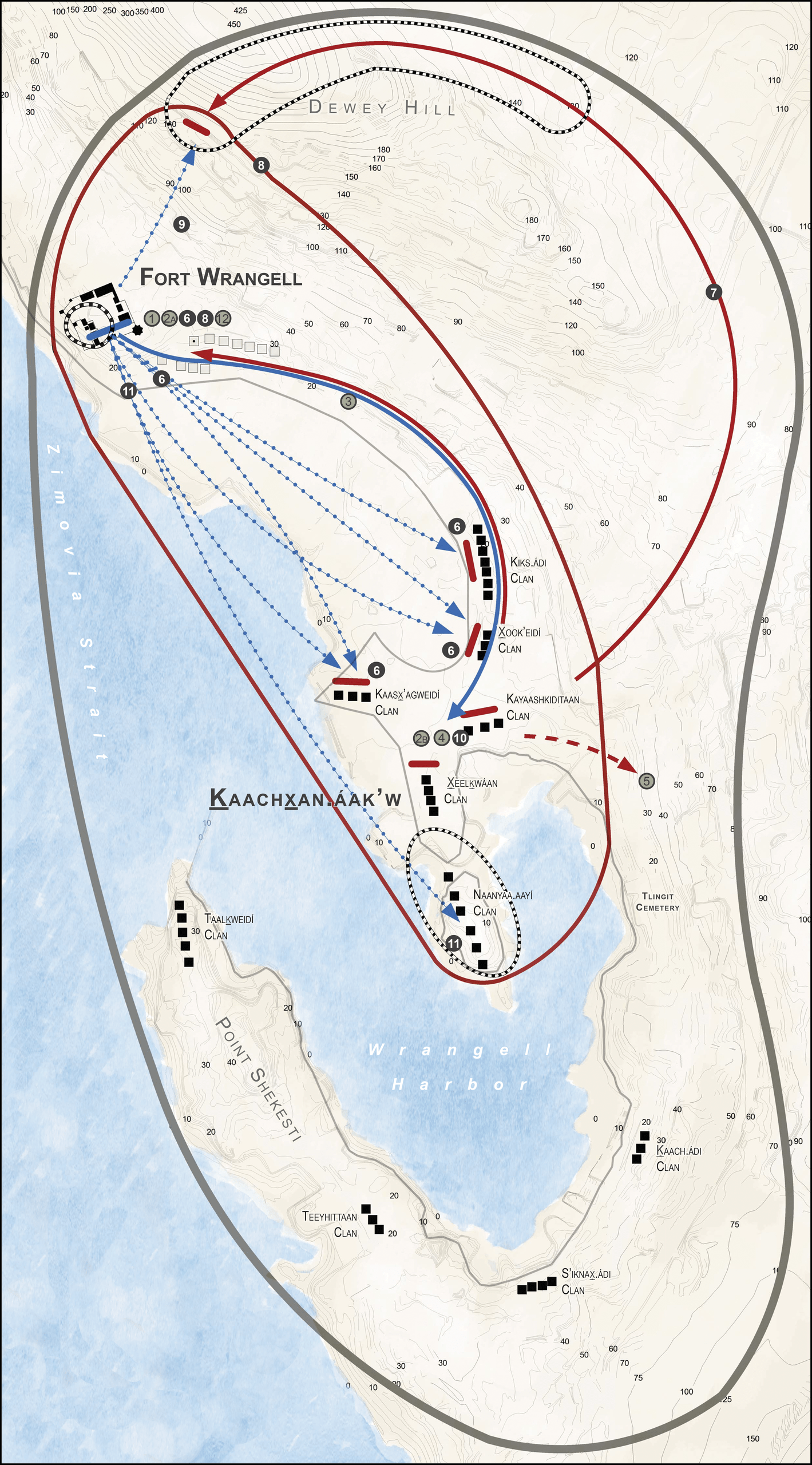