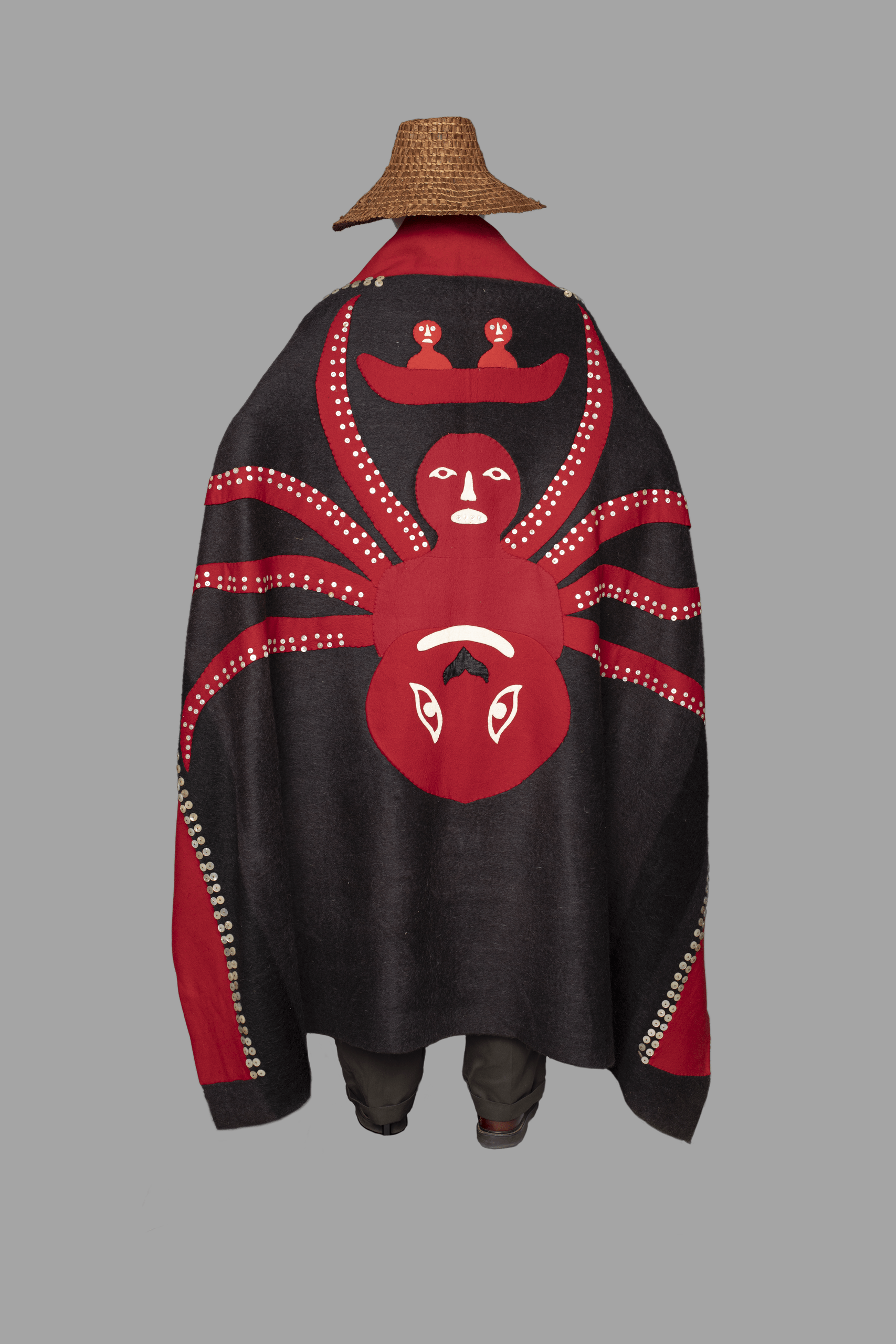 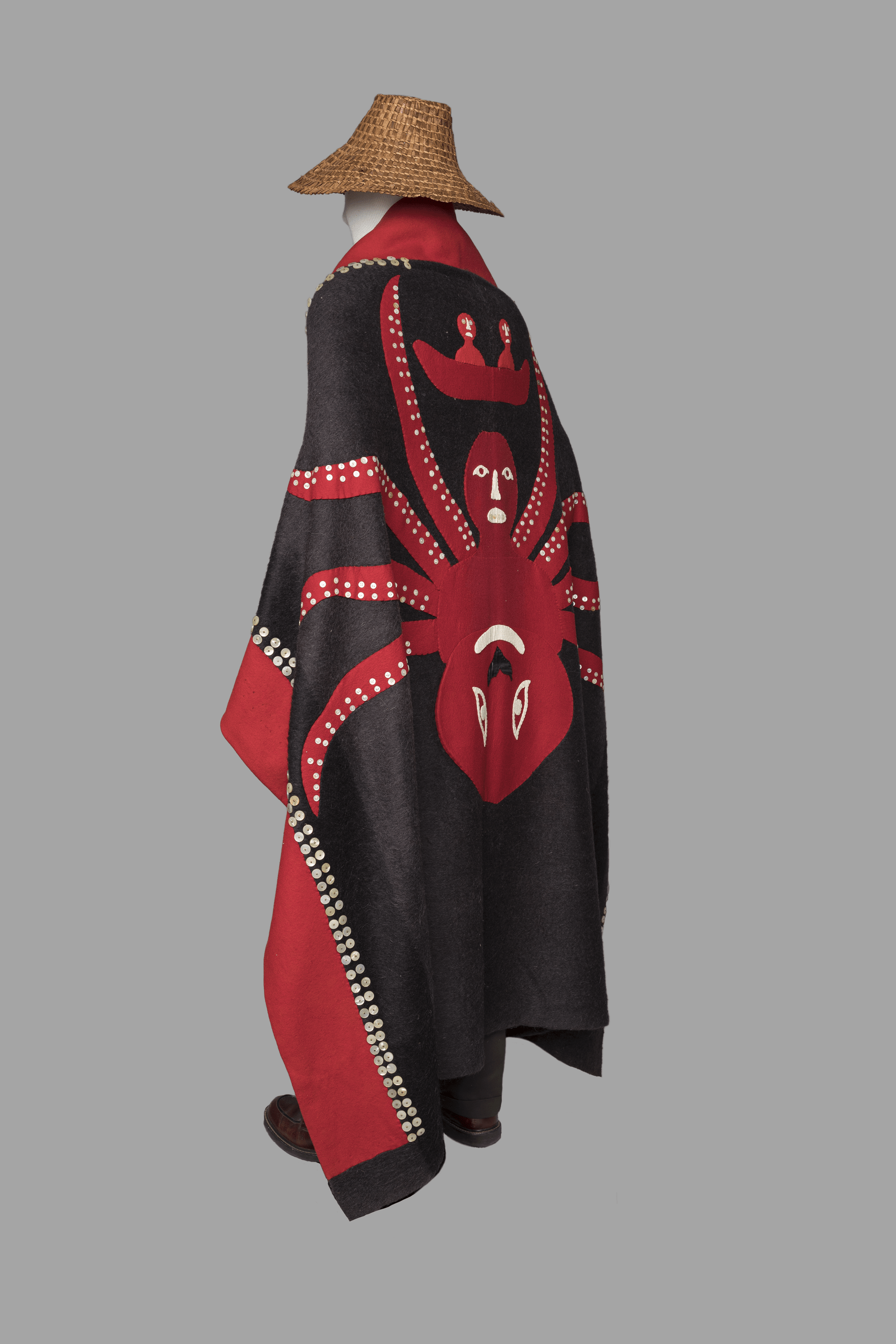 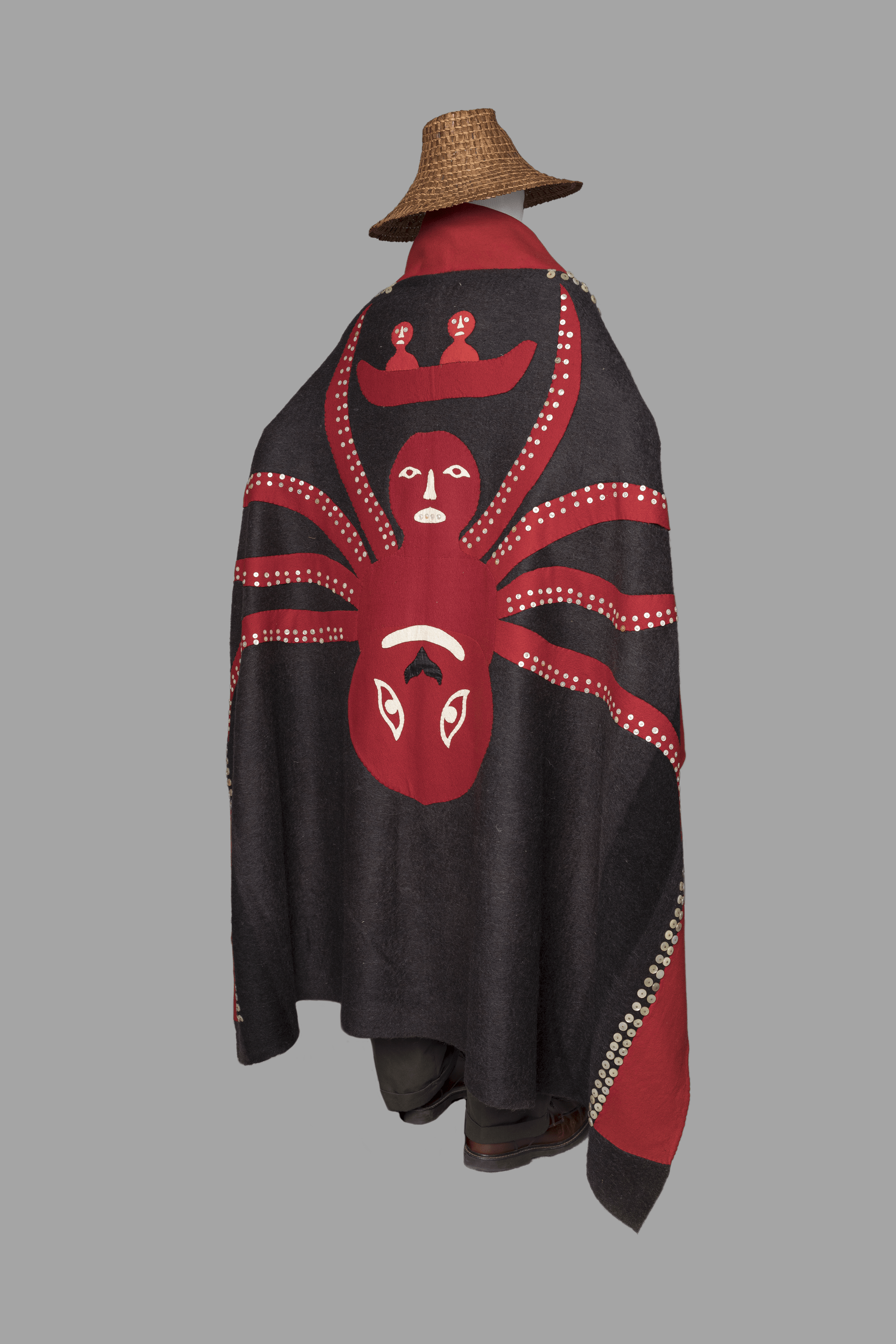 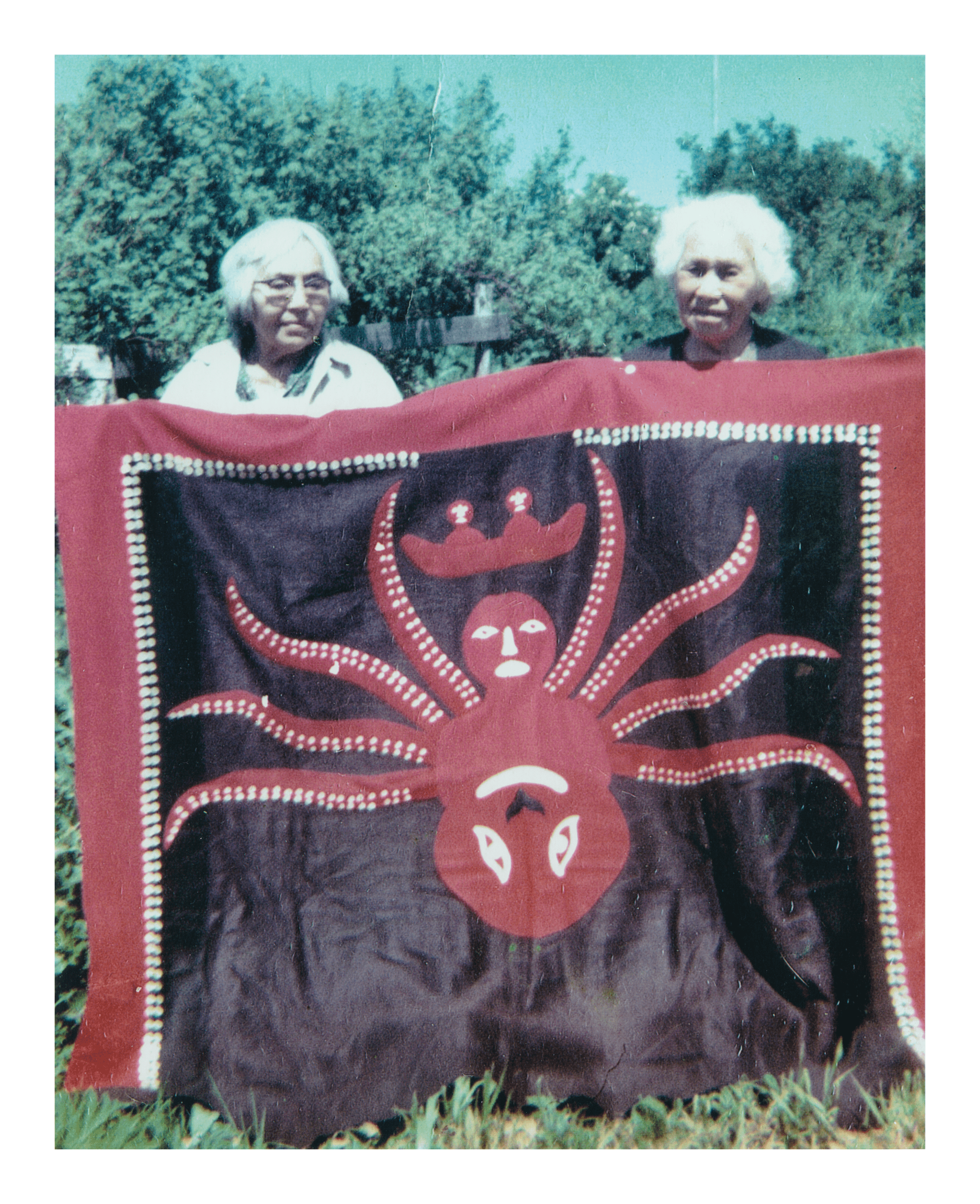 Emma Watson (right), original owner and commissioner of the Shame Blanket, with her sister Christine Edenso. Watson wore the blanket at various ceremonial events in Klawock into the 1960s.

Peace could be restored through one of several dispute resolution processes. One such mechanism is through the court of public opinion. If a clan did not acknowledge it had committed a wrongful act, a ridicule or shame pole, blanket, or mask might be displayed by the offended clan to signify an offense had occurred. The public display exerts pressure on an offending clan to meet its legal responsibilities.

According to Gòox Tlèn Clara Peratrovich, the Nakw.aaní (Devilfish Bay) Button Blanket is intended to be a Shame Blanket. The face on the octopus represents a thief who stole some valuables from a L’eeneidí clan member and failed to make restitution. The face will remain on the blanket until the L’eeneidí clan receives adequate compensation for the theft. If the clan repays the debt, the face will be removed to signify the resolution of the incident. The clan has not repaid the debt, and thus the shame continues.

The appliqué design was commissioned in the 1930s by the L’eeneidí – Raven (Dog Salmon) clan of Klawock. It depicts a giant octopus with two men in a canoe who lost their lives while dispatching the octopus, which had destroyed the L’eeneidí village located in the bay. The L’eeneidí clan took the octopus as a clan crest after this event. A member of an opposite clan, Yanyeidí of T’aakú Kwáan, was commissioned to make the design.

The blanket is a Hudson Bay navy-black woolen blanket purchased around 1867.

Mortgage
Rock and Bundle of Sticks

The Kiks.ádi clan held a ceremony and placed a large rock on a table and said it symbolized their land. They then placed on the table a bundle of short sticks tied together with fish line and said the sticks represented their clan houses.

Finally, they presented another bundle of sticks tied together by a strip of calico that represented blankets and symbolized wealth. The clan acknowledged they would repay their debt “stick by stick.” The mortgage held by the aggrieved clan has not been repaid. 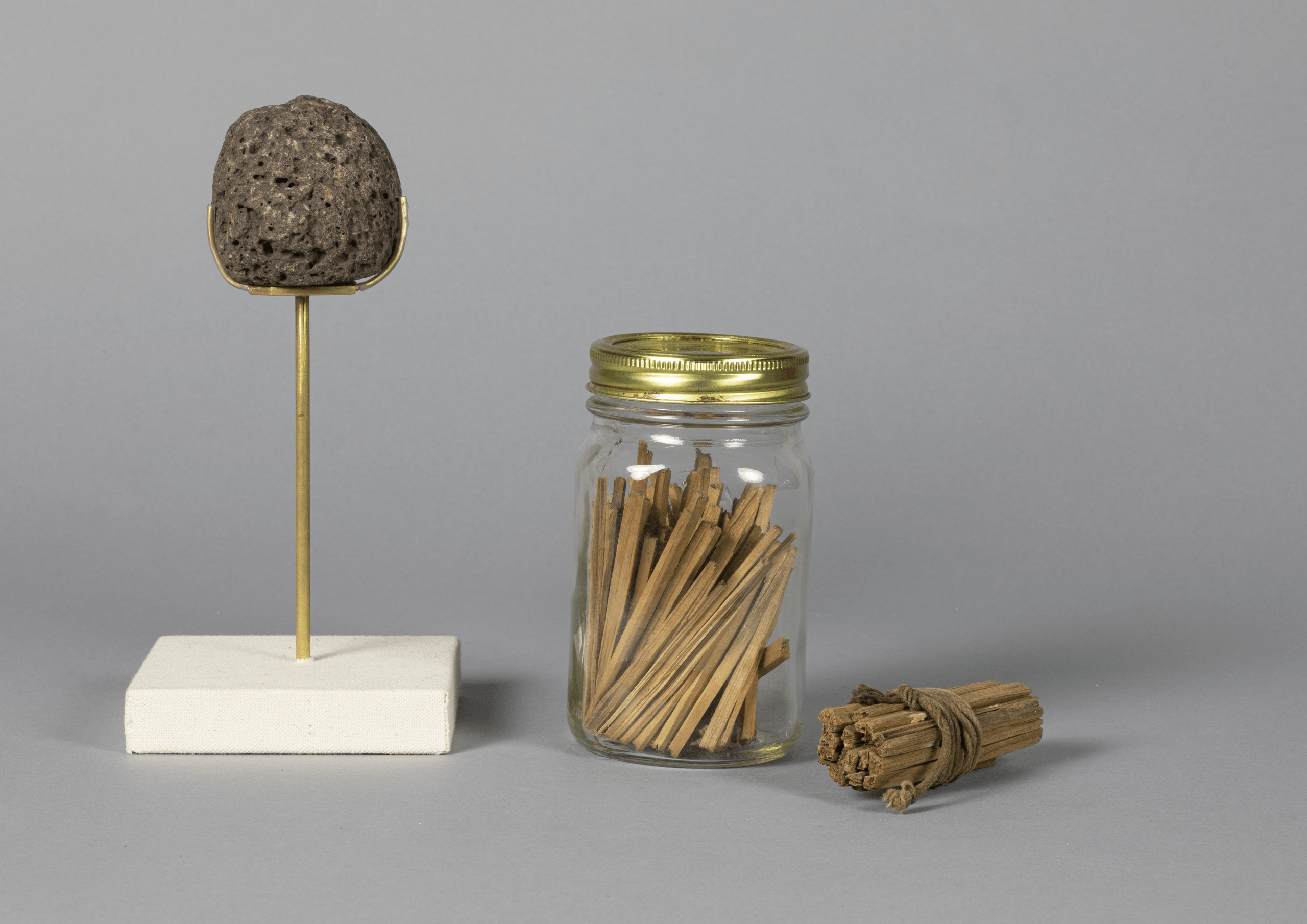 The rock and wooden sticks represent this transaction and are from the estate of the late Alex Andrews of Sitka, a Kaagwaantaan clan leader of the Eagle Nest House.