The traditional Tlingit value of Wooch Yáx (Social and Spiritual Balance) governs interrelationships between Tlingit clans, and between the Tlingit and other tribes, nations, and institutions. The settlement of disputes between Tlingit clans and other groups relied on concepts of balance, achieved through compensation, to approach a state of peace among the parties. Inter-clan warfare was formally ended by a Peace Ceremony performed to restore balance. Negotiations to settle disputes relied on balance and restitution. The Peace Ceremony, called the Guwakaan or Deer Ceremony, validated the decisions of clan leaders reached through negotiation.

Resolution of Conflicts and the Tlingit Peace Ceremony

The Tlingit maintained their own complex dispute resolution process until American law placed restrictions on enforcing their traditional sanctions.

One of the mechanisms to resolve conflicts and restore balance was the Peace Ceremony. The Tlingit Peace Ceremony was a religious and legal ceremony held to restore balance and harmony between disputing parties, and to confirm an agreement on restitution for any outstanding claims. After the disputants decided to stop their confrontation and make arrangements for an equitable peace settlement, clan leaders and Elders met in council and negotiated an agreement.

The negotiation and settlement of disputes between Tlingit clans occurred over a year-long process. The Peace Ceremony must be performed and completed to validate the agreement; otherwise, there is no peace.

As part of the agreement, the clan that had committed an offense against another clan surrendered a member of its clan as a hostage to the aggrieved clan. The individual who served as the hostage was not necessarily the individual who committed the crime. If the transgression had resulted in a death, the hostage had to be of equal rank as the clan member who had died. The aggrieved clan had the option to immediately kill the hostage or to keep him for a year; however, the law also required special treatment of the hostage.

This exchange of hostages was universally demanded by the Tlingit peoples and was considered a safeguard to settle disputes. Here is an example of a clan that took a hostage from another clan and then later performed a Peace Ceremony.

Story of a Peace Ceremony between two Tlingit Clans

A Lukaax.ádi clan song tells the story of a wife whose husband was taken as a hostage:

What do you think is going to happen to your Raven, Eagle?

He’s already been taken, so just accept your fate.

The story, which according to oral traditions occurred unknown generations ago, recounts that the wife, who belonged to an Eagle clan, was crying because she didn’t know whether her husband, who is of a Raven clan, would be killed or allowed to live. Even if he was allowed to live, she would not be able to see him for an entire year.

During the year, the hostage was kept captive and was governed by strict taboos. He was not allowed to use the hand which was used to commit the crime — not even to feed or clothe himself. The attendants assigned to the hostage were required to care for his every need otherwise their shaman could lose his powers. The hostage also acted as a mediator or judge. He could impose a punishment on his clan if they violated any terms of the treaty.

A Tlingit symbol of peace is the deer or Guwakaan since it is considered gentle and is a symbol of peace. The Peace Ceremony was performed a year after a hostage was taken. In the ceremony, the hostage is transformed into a Guwakaan. He was given a name after a life-giving object such as spring water. The weeklong ceremony began with the two clans meeting on neutral grounds. The hostage was carried on the shoulders of his attendants in a circle in a counterclockwise direction. He then danced between his two attendants. The first song that is sung is sad and then is followed by happier songs. The Guwakaan extends his arms outstretched as if he were holding a bucket of spring water to signify that peace is at hand. Members of his clan dance forward, dip their hands into the bucket, and then act as if they were drinking the life-giving spring water.

After the ceremony, the Guwakaan was allowed to return to his clan.

One of the last traditional Peace Ceremonies was held in the early 1900s between the Wrangell Eagle Kaagwaantaan clan and the Sitka Raven Kiks.ádi clan. 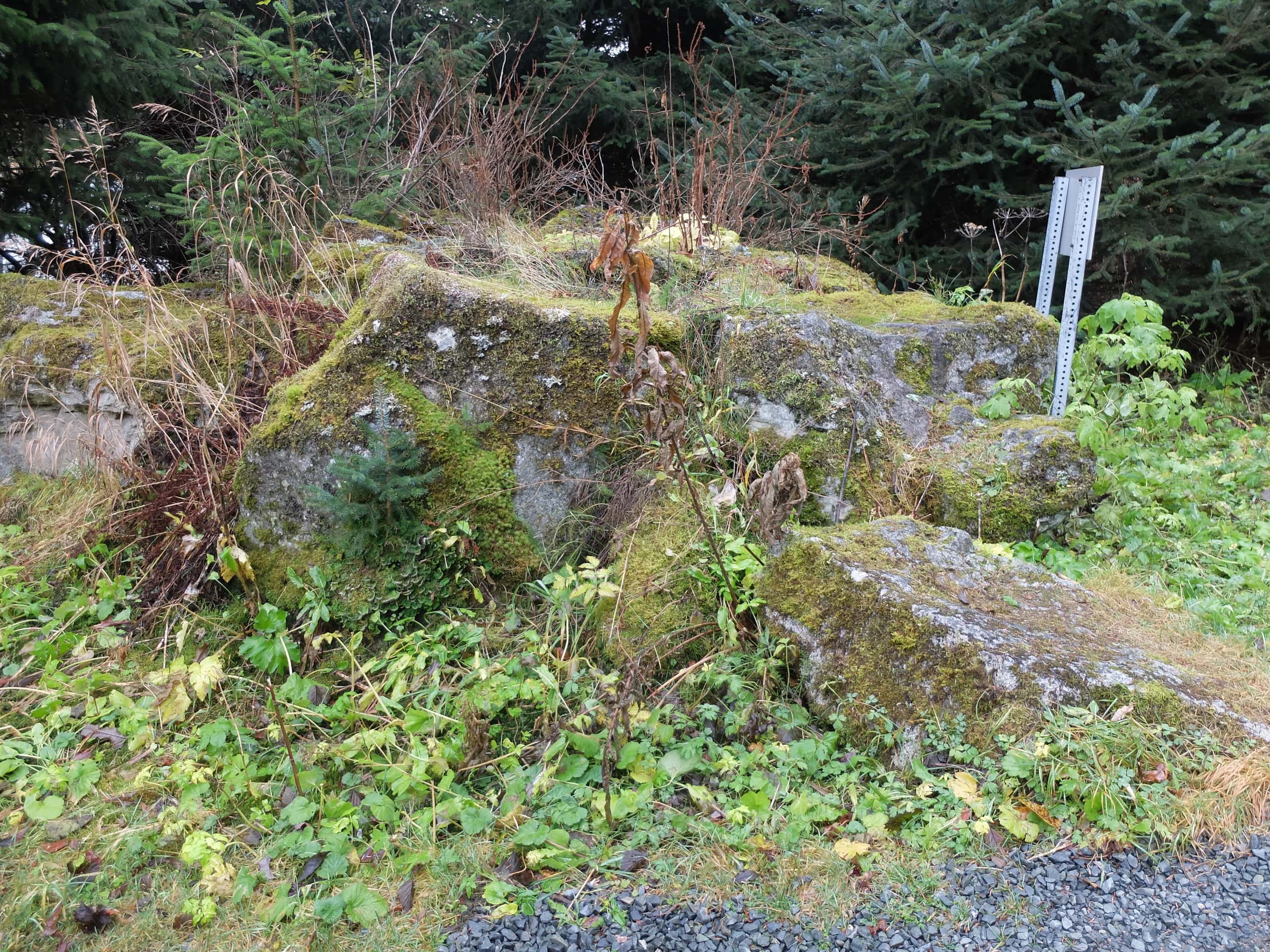 Deer Rock or Peace Rock (called Guwakaan Teiyí in Tlingit) along the Chilkoot River is a large boulder that was blown apart in the 1970s when the state decided to build a road along the Chilkoot River. Deer Rock holds special meaning to the Tlingit clans since it is a place where settling disputes occurred. A peace ceremony was held by the Lukaax.ádi clan to protest the desecration of Deer Rock and other offenses regarding the exploitation of clan land and resources committed by the state of Alaska. 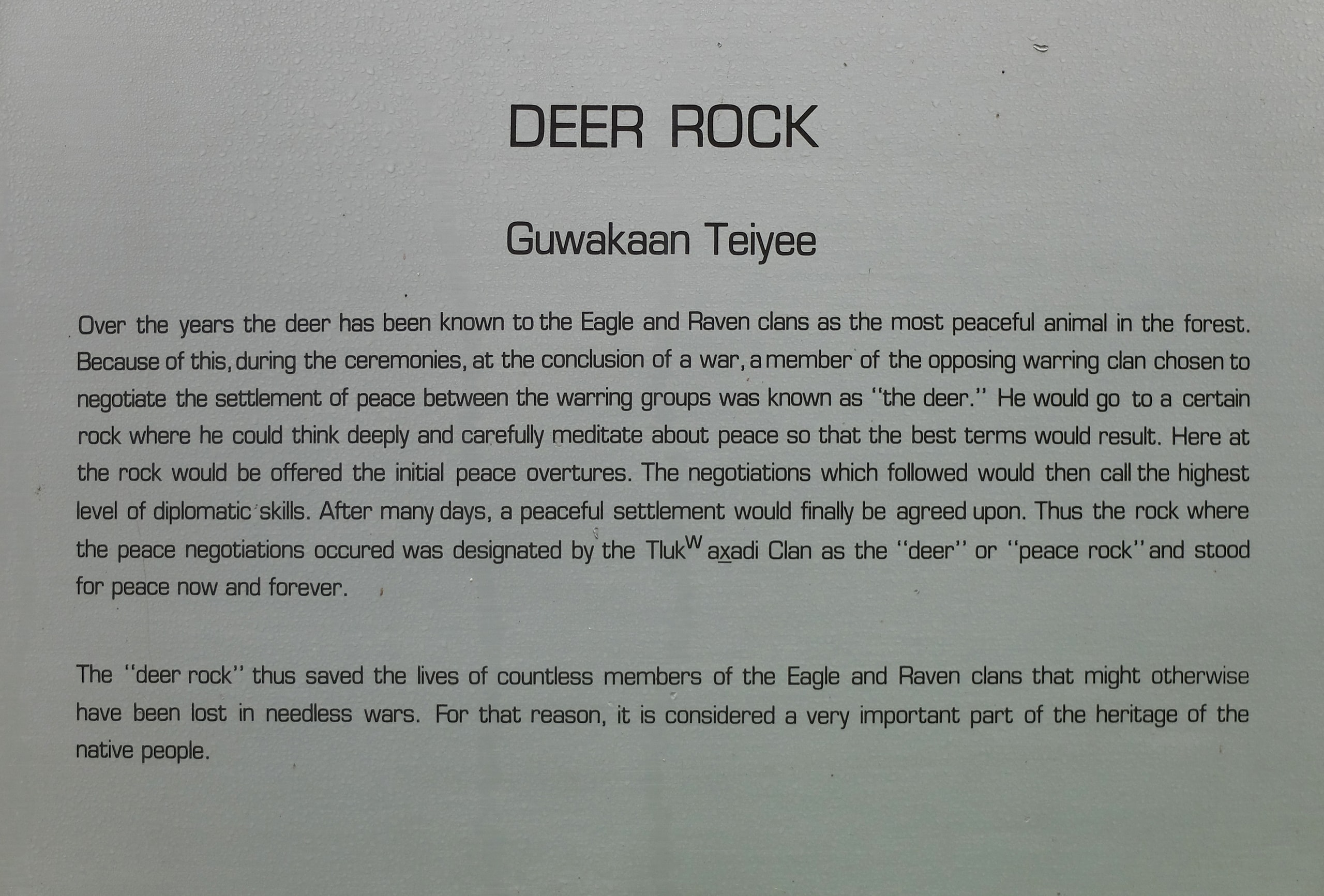 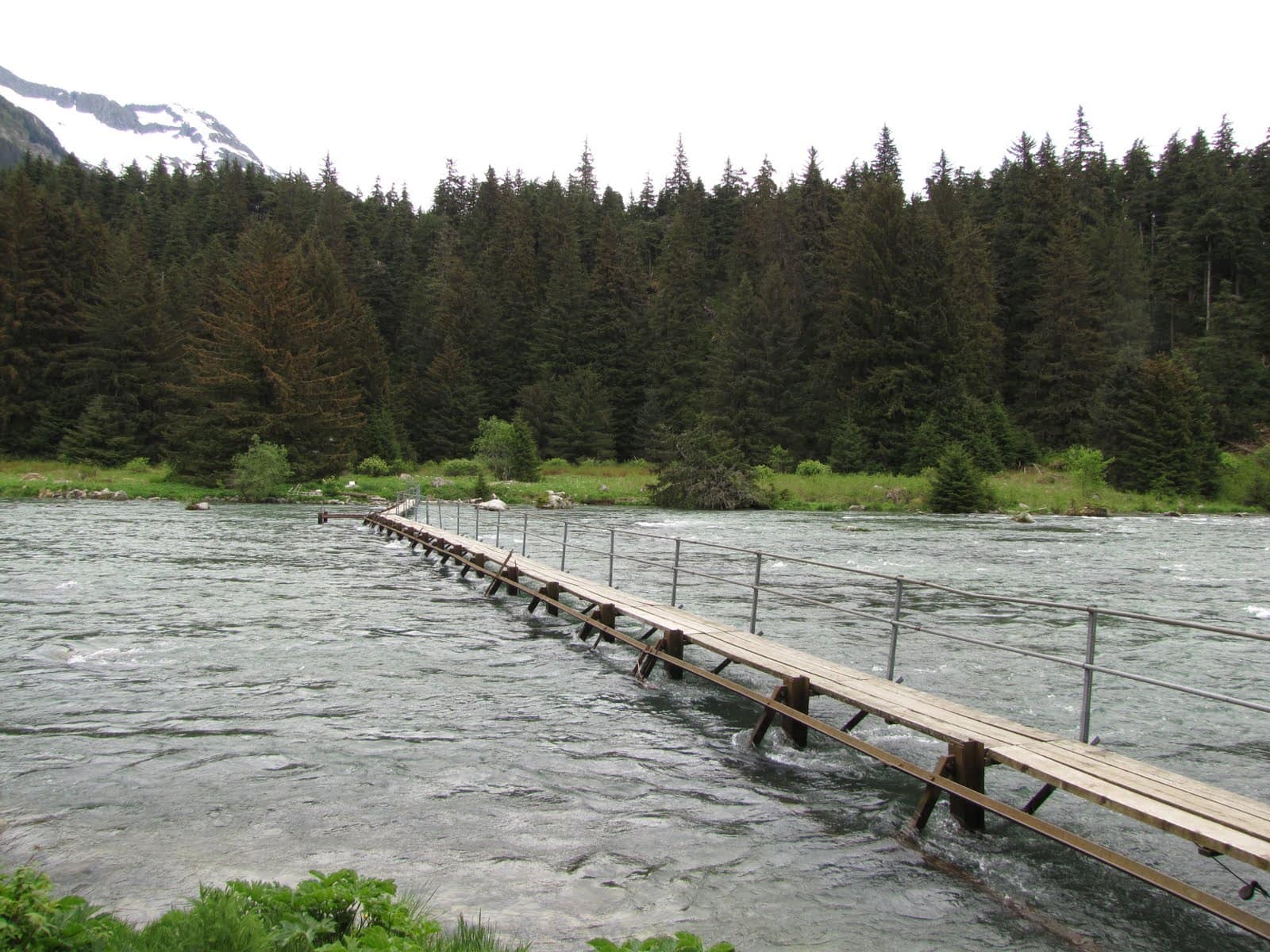 Usually the Peace Ceremony is held to restore balance, but in this instance a clan leader stated conditions that would have to be met by the State of Alaska before the ceremony would be completed and balance restored. There were four conditions that remain unresolved by the state of Alaska:  Peace Rock/Deer Rock needs to be made whole, the fish weir must be removed, sacred burial grounds need to be protected, and the Tlingit peoples can lawfully catch salmon in this river.  Although this event took place 35 years ago, these imbalances still exist.

“A fish weir has been placed across the river, causing the salmon to pause in their spawning migration upstream…. Salmon knows his river, but his way is blocked….”

In 1980, the Lukaax.ádi clan conducted a Tlingit Peace Ceremony both as a cultural event and as an appeal for justice in the struggle of the Tlingit people against exploitation of their tribal land and resources. The Peace Dance was intentionally not completed. 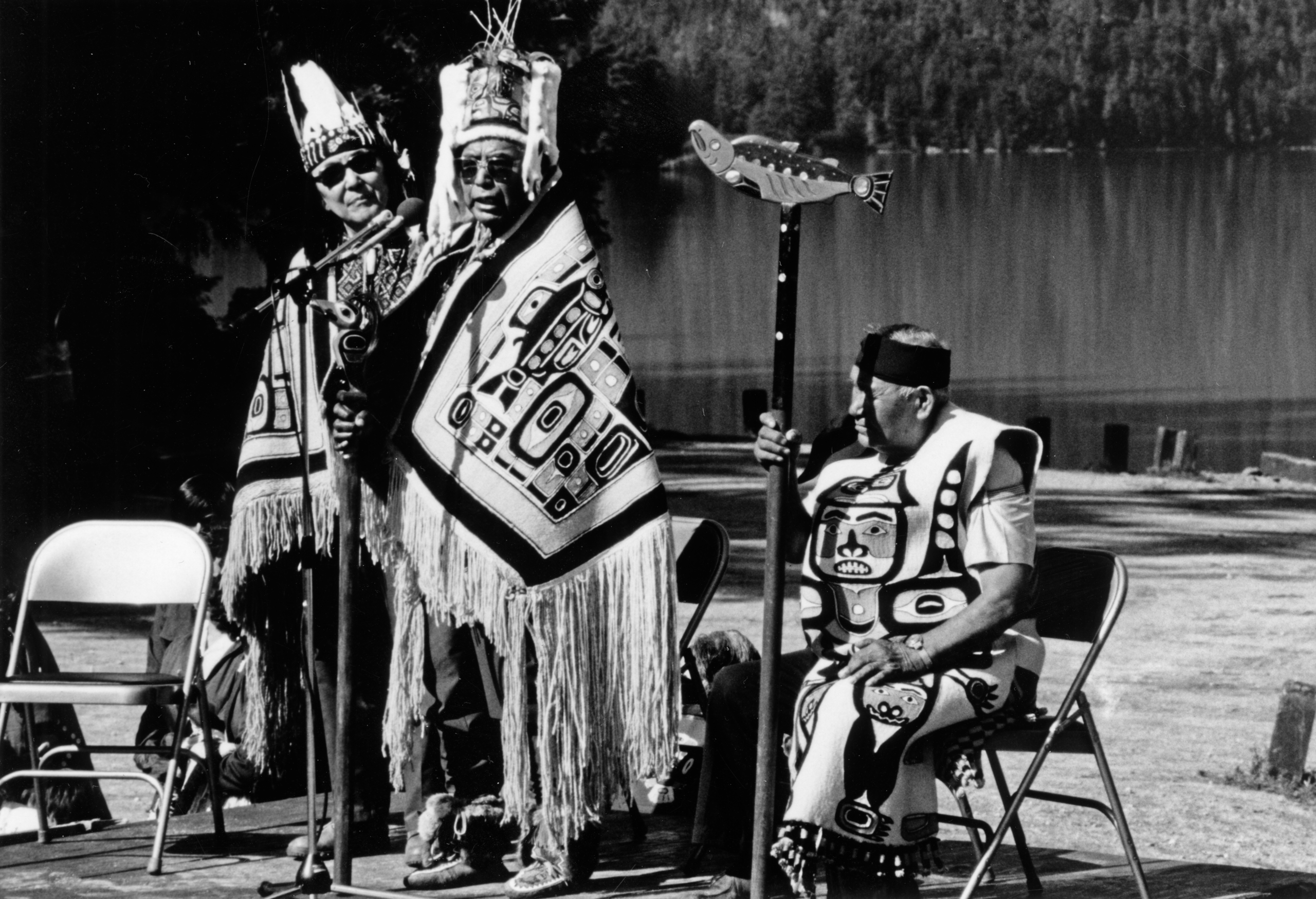 Walter Soboleff, Austin Hammond, and George Davis conducting a Peace Ceremony on the bank of the Chilkoot River, 1980

“Were peace to be made, her arms and blankets would be open. … The arms will remain folded, for today our peace is not whole, our request is not fulfilled.” 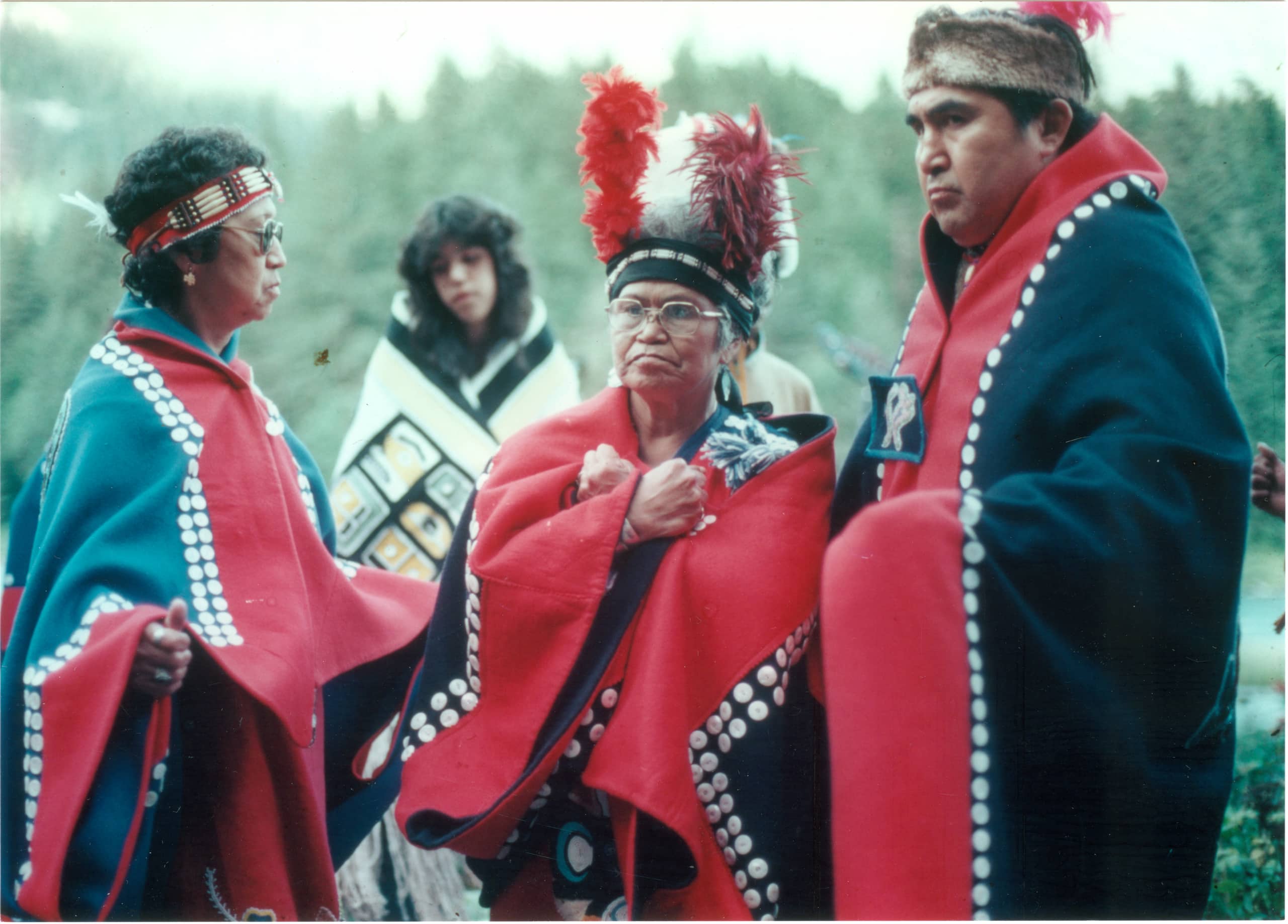 Daisy Phillips enacting the role of the Peace Deer during the Peace Ceremony conducted on the banks of the Chilkoot River, 1980