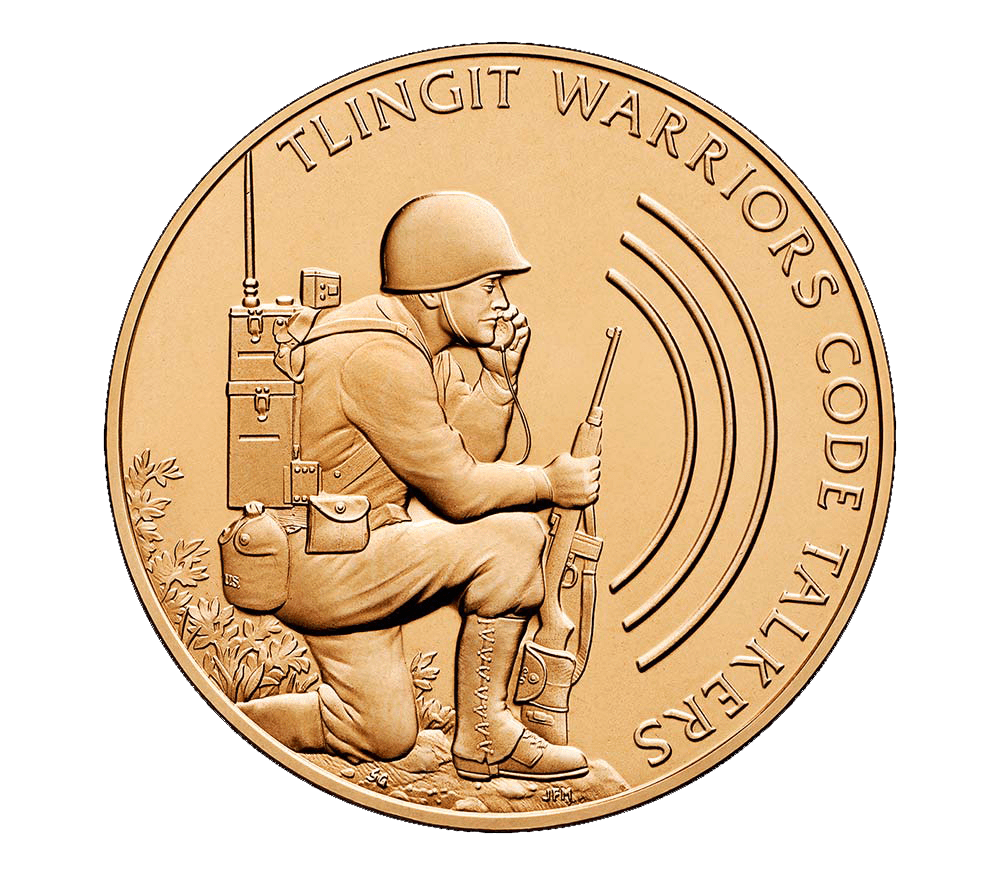 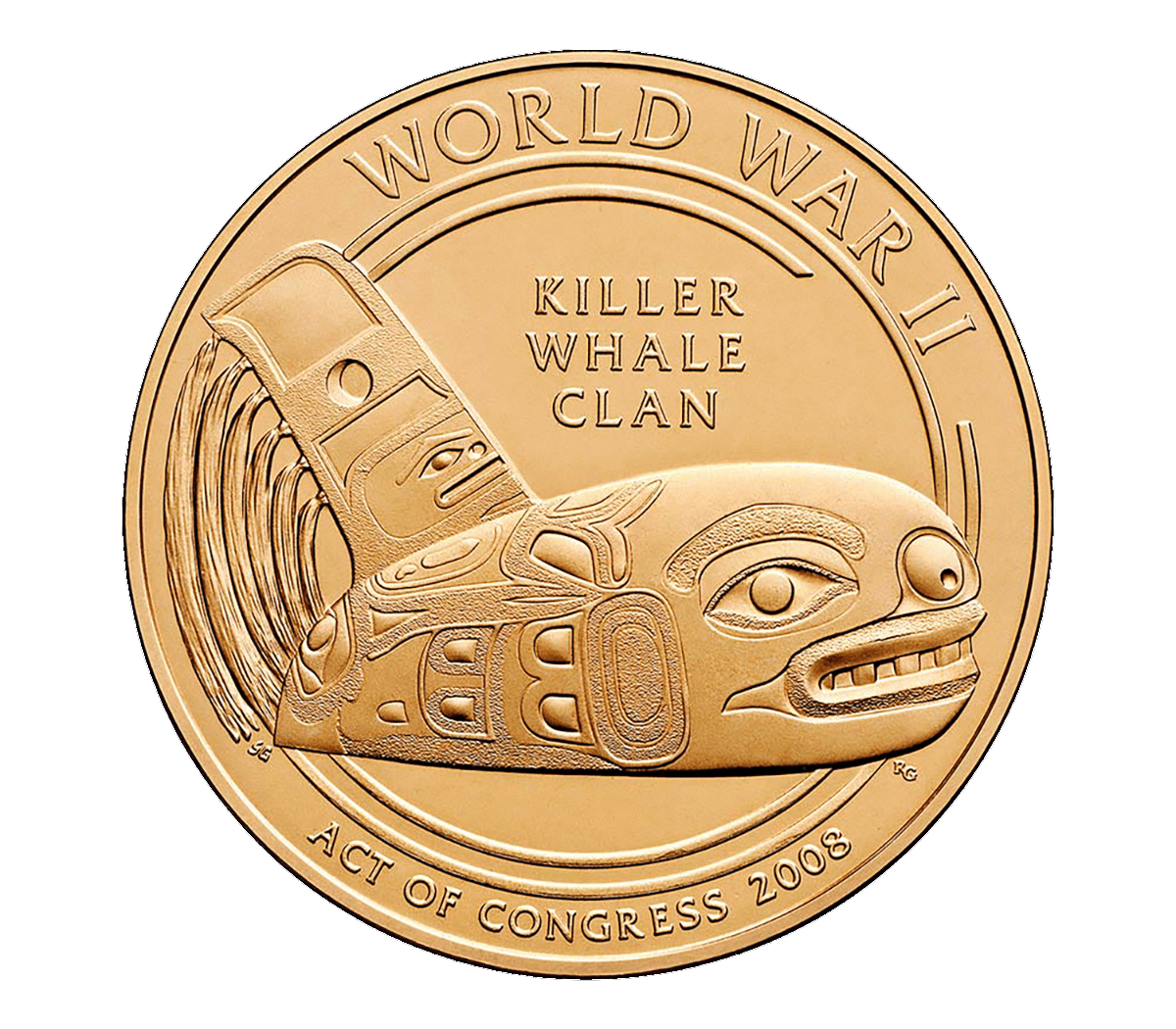 “During 48 hours on Iwo Jima, they say 800 Native language battle communications were received and translated. It took seconds, at a time when decoding by machines could take half an hour. The men undoubtedly saved lives.” 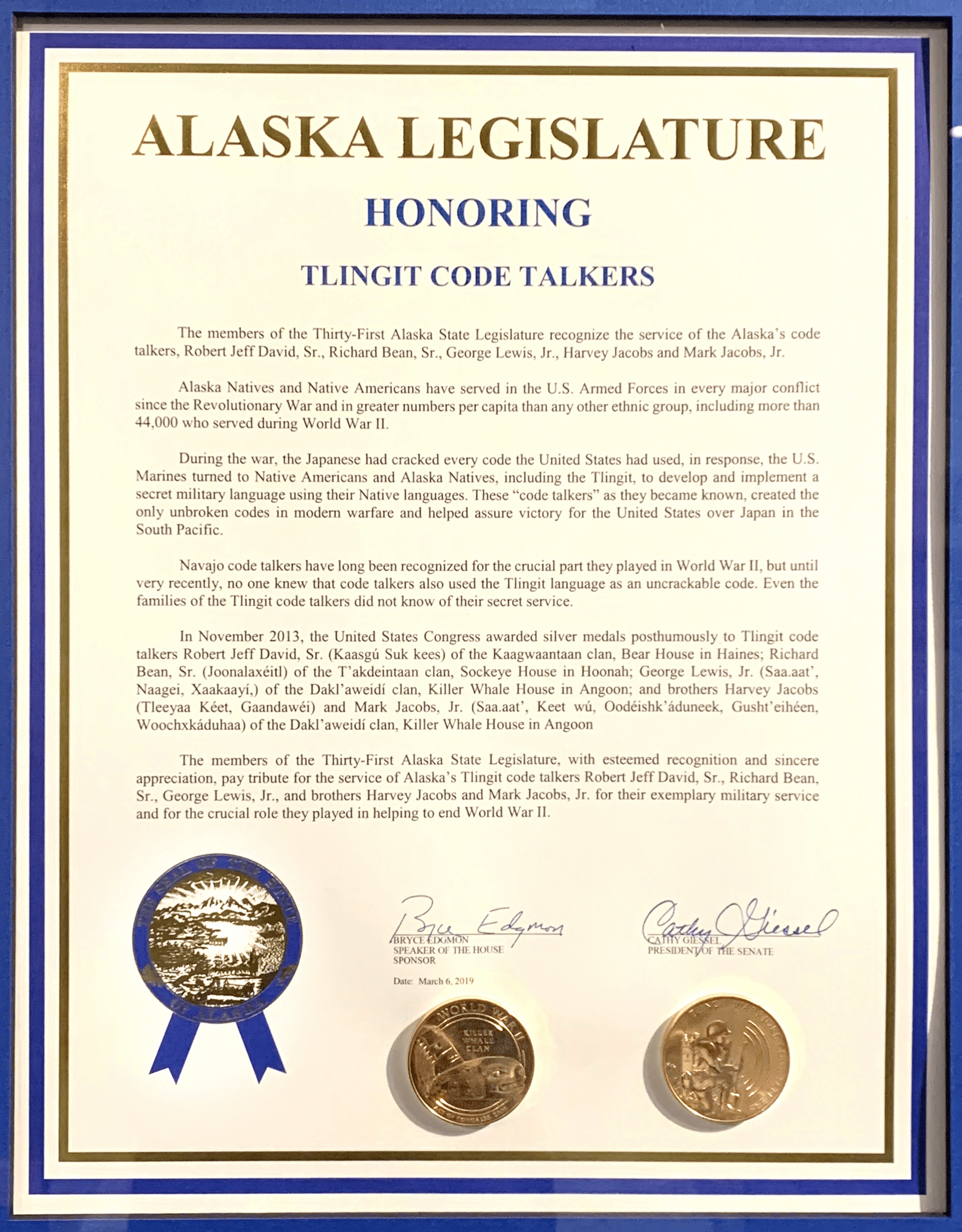 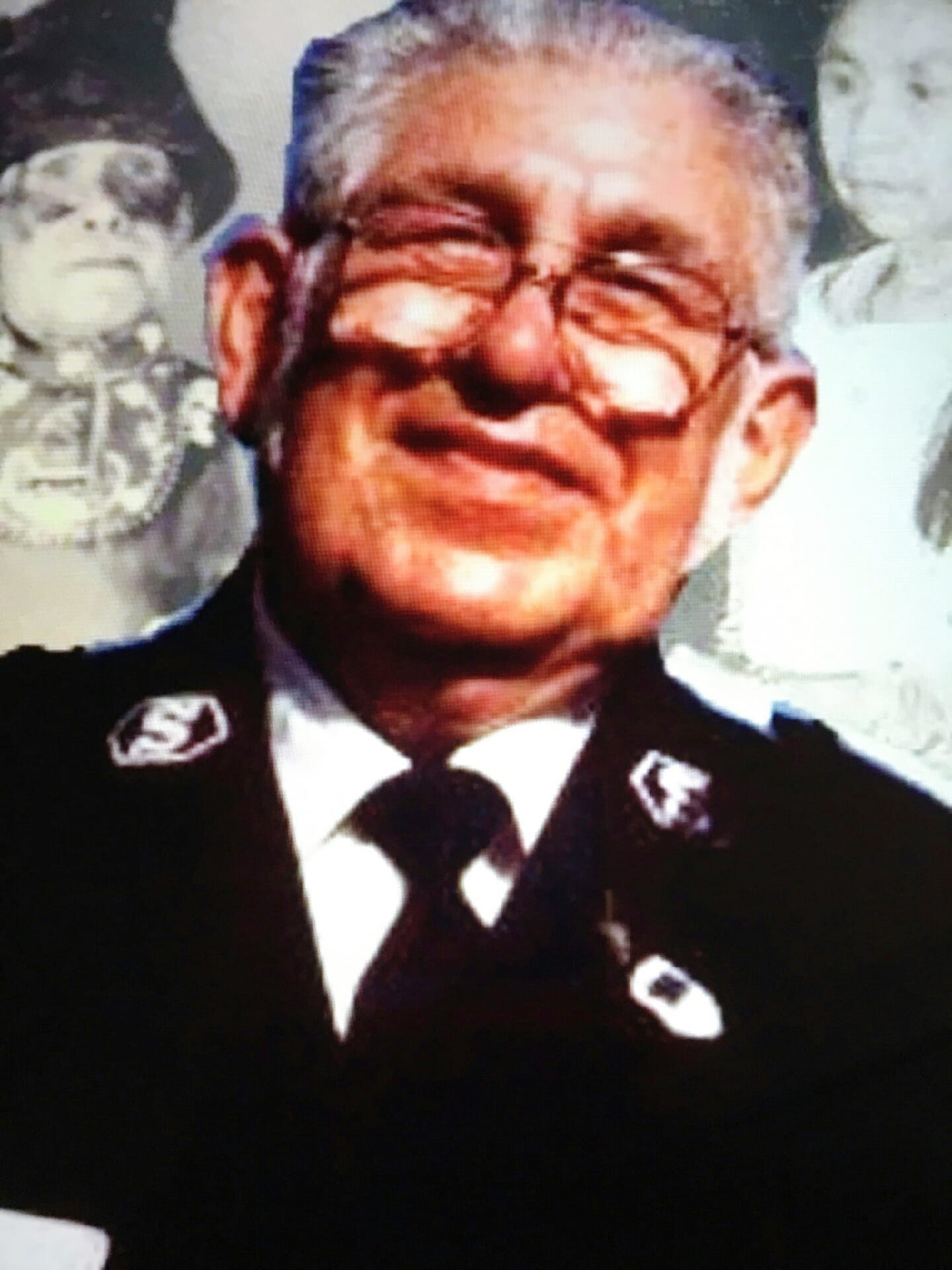 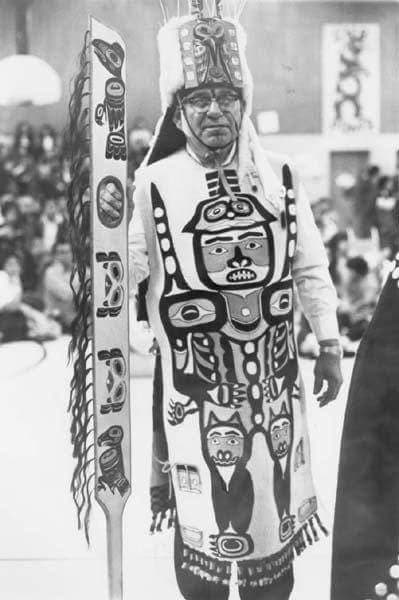 George Lewis, Jr., (Saa.aat’, Naagei, Xaakaayí) was a boat builder, carpenter, and mill worker from Sitka. He was active in fishing, boxing, silver carving, and carving totems and Tlingit helmets. In addition, George gave 45 years of service to the Salvation Army, was a lifetime member of the Alaska Native Brotherhood in Klawock and Haines, and was a fluent Tlingit speaker and storyteller. He served in the U.S. military in World War II.

Harvey Jacobs (Tleeyaa Kéet, Gaandawéi) was a fisherman from Sitka. When he and his brother, Mark Jacobs, Jr., joined the U.S. Navy shortly after Pearl Harbor, they skipped basic training and were put to work immediately on picket boats in Southeast Alaska and the Aleutians, and then in the South Pacific. Harvey was a Machinist Mate 1st Class. 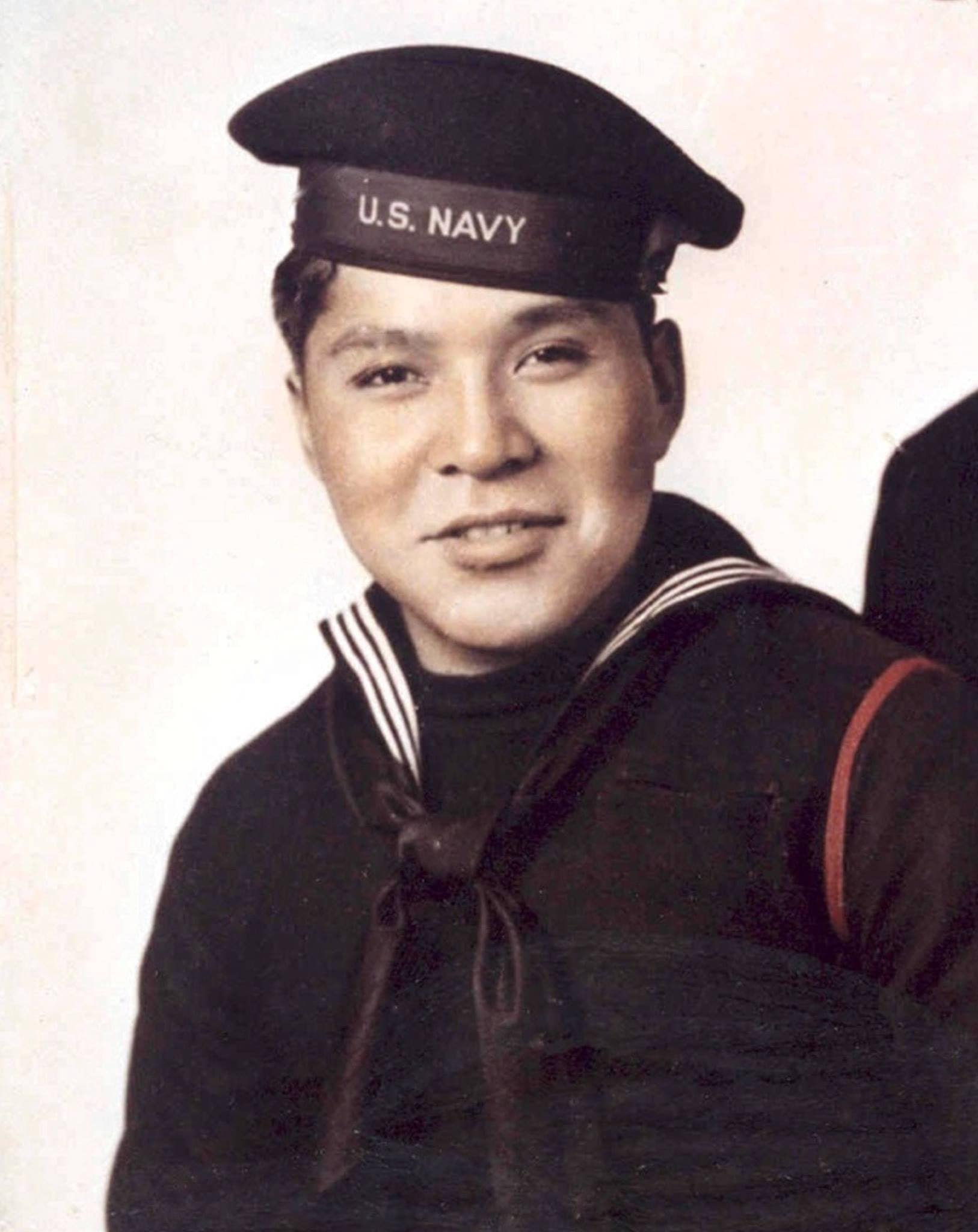 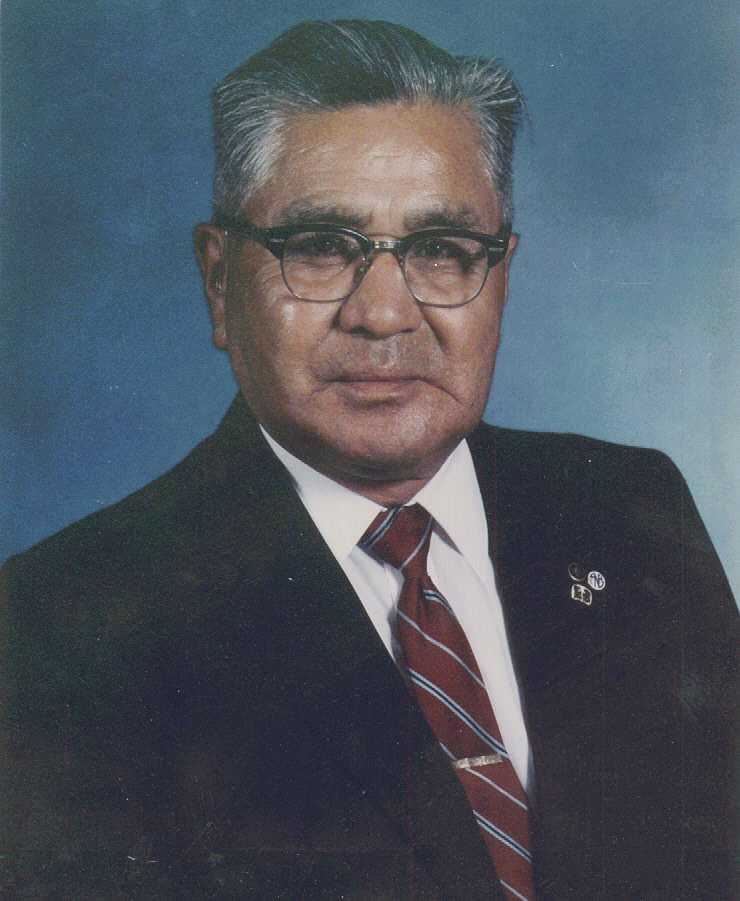 Mark Jacobs, Jr., (Saa.aat’, Keet wú, Oodéishk’áduneek, Gusht’eihéen, Wóochxkaduhaa) was a fisherman, leader, and historian from Sitka. He had vast knowledge of Tlingit culture and held positions in many groups, such as the Alaska Native Brotherhood, the Alaska Federation of Natives, the National Congress of American Indians, Central Council of Tlingit and Haida Indian Tribes of Alaska, and Sealaska. Mark served four years in the U.S. military, nearly all of which were in sea duty and in war zones.

Richard Bean, Sr., (Joonalaxéitl) was a well-known commercial fisherman from Hoonah — a purse seiner, crabber, troller, and halibut fisherman. Richard was a lifetime member of the Alaska Native Brotherhood, and a member of Sealaska, Huna Totem Corp., Juneau Veterans of Foreign Wars, and the Sitka American Legion. He was also an elder in the Hoonah Presbyterian Church. He served in the South Pacific during World War II. 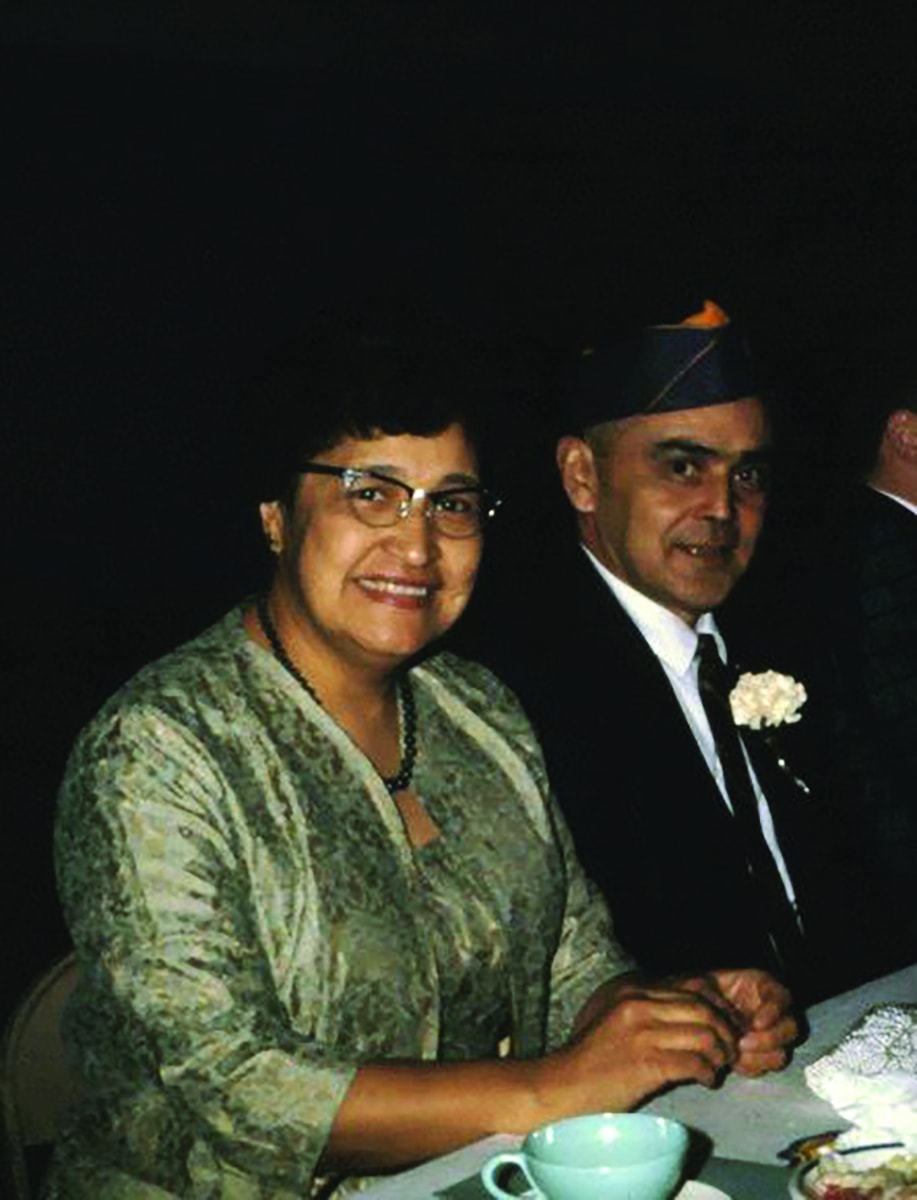 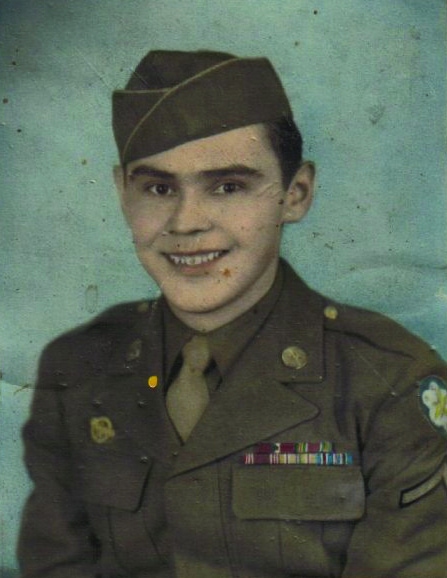 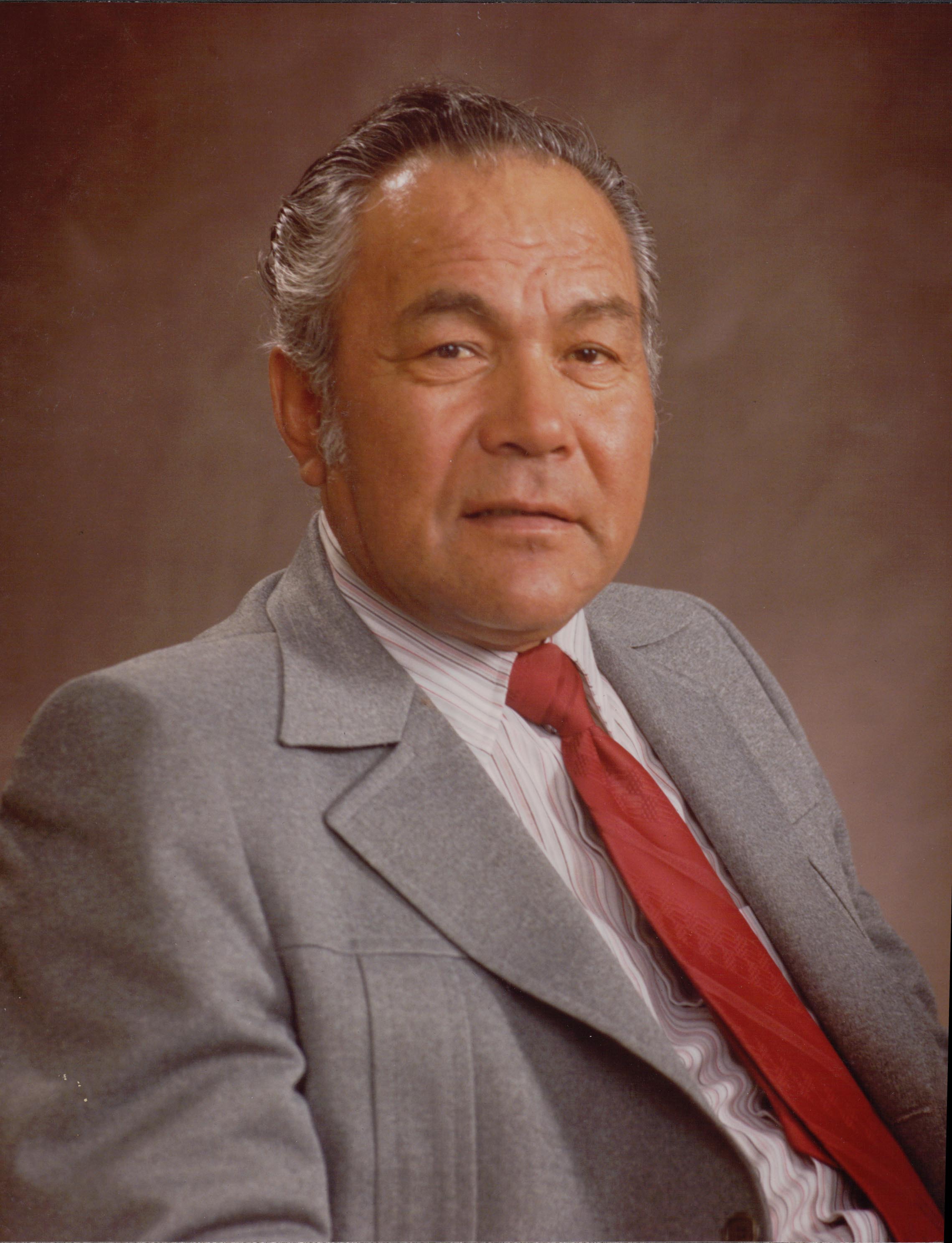 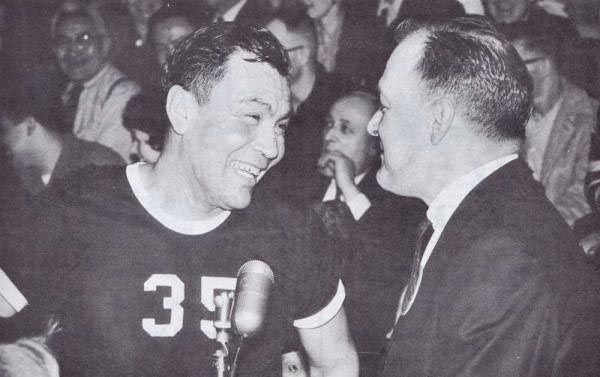 Robert “Jeff” David, Sr., (Kaasgú Suk kees) was a fisherman and basketball legend from Haines who was known all over Southeast Alaska. One of Sealaska’s first board members, Jeff was described as charismatic, confident, and outspoken. However, his son, Jeff David, Jr., says his father never talked much about his service in World War II, other than that he served in the Philippines for part of it and was in special services.